Letter from the Editor of LEME

Word of The Day

Were=wulf. This name remaineth stil known in the Teutonic, & is as much to say as man=wolf; the greeks expressing the very lyke, in Lycanthropos. Ortelius not knowing what were signified, because in the Netherlandes it is now cleane out of vse, except thus composed with wolf, doth mis-interprete it according to his fancie. The were=wolues are certaine sorcerers, who hauing annoynted their bodyes, with an oyntment which they make by the instinct of the deuil; and putting on a certaine inchanted girdel, do not only vnto the view of others seeme as wolues, but to their own thinking haue both the shape and nature of wolues, so long as they weare thesaid girdel. And they do dispose themselues as very wolues, in wurrying and killing, and moste of humaine creatures. Of such sundry haue bin taken and excuted in sundry partes of Germanie, and the Netherlands. One Peeter Stump for beeing a Were=wolf/ and hauing killed thirteen children, two women, and one man; was at Bedbur not far from Cullen in the yeare 1589. put vnto a very terrible death. The flesh of diuers partes of his body was pulled out with hot iron tongs, his armes thighes & legges broken on a wheel, & his body lastly burnt. He dyed with very great remorce, desyring that his body might not be spared from any torment, so his soule might be saued. The Were=wolf (so called in Germanie) is in France, called Loupgarov.
Richard Verstegan, A Restitution of Decayed Intelligence (1605) 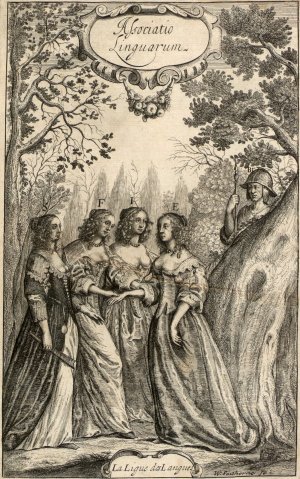